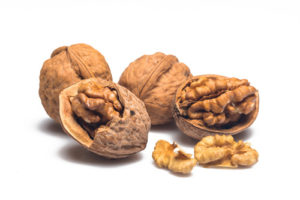 Native to Asia, the Mediterranean, and North and South America, the walnut is a large deciduous tree with a massive trunk and large, spreading branches. It can reach a height of 100 feet and bears both male and female flowers in late spring. The insignificant tiny green female flowers grow in small clusters at the tip of the annual growth, while the yellowish-green male flowers grow in catkins (long flower clusters). The trees are commercially cultivated in many regions around the world for their timber, as well as for their nuts. The Butternut is native to North America and also cultivated for its timber and nuts. The bark of the walnut species is used for medicinal purposes and collected in long, thin strips during the autumn months.

The bark of the walnut was used by Native Americans and early settlers as a laxative and tonic remedy, as well as for a variety of other conditions, including rheumatic and arthritic joint pain, headaches, dysentery, constipation, and wounds.

It is a common tree in Mexico, where the leaves and bark were used in traditional medicine.

It is one plant that has the ability to cure opposing disorders. The bark is used as a mild laxative, while the leaves are used as a remedy for dysentery.

Fresh leaves and a Walnut Bach flower remedy from the leaves is recommended for times of change, including menopause or moving away.

Infusions made from the nut casings have been used as a hair dye and for chronic diarrhea or as a tonic in anemia.

Treatment of other conditions include skin problems, such eye inflammations as conjunctivitis and blepharitis, a digestive tonic for poor appetite, as a liver stimulant, and applied externally to skin diseases.

The nut oil contains many valuable nutrients, including vital essential fatty acids; and is used to treat dry, flaky eczema. The nuts, as well as being a nutritious food, are used in Chinese medicine as a kidney tonic.

A decoction from the inner bark is a potent laxative and safe to use even during pregnancy. It is especially beneficial when combined with such other carminative herbs as ginger or angelica.

It has long been used to rid the body of intestinal worms, and it promotes the clearance of waste products by the liver.