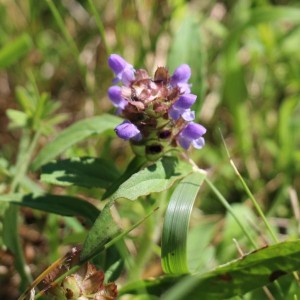 Native to Europe and Asia, self-heal can be found in temperate regions worldwide, including North America. It is an incredibly vigorous, wayside plant that spreads underground in every direction, and often found growing in sunny meadows and along roadsides. Related to mint, the herb is a creeping perennial that grows to about twenty inches, producing pointed oval leaves and spikes of throat-shaped, violet-blue or pink flowers. Self-heal spreads by self-seeding or by its roots, and germinates easily. The aerial parts are picked in summer when the plant is in bloom.

The plant has a long history for wound healing, and was widely used to stop bleeding.

In the past, the long flower spikes were thought to resemble the throat and, under the Doctrine of Signatures theory where plants cured those parts of the body they most resembled, this herb was used for healing that area of the body in particular, especially inflammations of the mouth and throat.

In 1597, herbalist John Gerard advocated its use for wound healing and stated that putting the juice from the leaves and flowers on the temples took care of headaches in short order.

In 1735, the Irish herbalist K’Eogh stated that it would heal all internal and external wounds, as well as stimulate the liver and gall, making it a useful treatment for jaundice.

Self-heal is found throughout North America and used by many Native American tribes to heal, as the name suggests, almost everything. The Mohegan, Iroquois, and Delaware have used it to relieve fevers. Several tribes, including the Blackfoot, Cherokee, Coast Salish, Iroquois, Quebec Algonquin, Quileute, and Qunault, used it topically to treat acne, boils, bruises, cuts, hemorrhoids, sores, and other skin inflammations.

Chinese research shows the herb to have moderately strong antibiotic action against a broad range of pathogens, including Shigella species and E. coli strains which cause enteritis and urinary infections. Experiments indicate that it has a broad scope of antimicrobial powers, including killing many pathogenic fungi.

The leaves and young shoots are used by Western herbalists to stop bleeding, and applied fresh in poultices as emergency first aid on clean cuts. It stauches bleeding and accelerates the rate of repair.

In the southern US, it is called Groundhog Plantain or Square Weed and collected as a spring tonic and also eaten as a spinach substitute.

In China, it is called Hsia-ku-tsao, and also used as a tonic. They collect the plant as it spikes into bloom, taking the lower leaves and flower heads to treat fevers and rheumatism. They also use them as an alternative, a substance which helps the body change from a state of sickness to one of health. When taken in tea, it is believed that the plant helps the entire body stay well. It is said to assist liver function, resulting in bright, clear eyes. It is also used to treat lumps in the neck and swollen glands. This is understandable since swollen glands mean that the immune system is becoming sluggish.

In New Zealand, the plant is widely used as a first aid ointment. The ground plant is applied to cuts, wounds, bruises, and sores that are resisting healing.