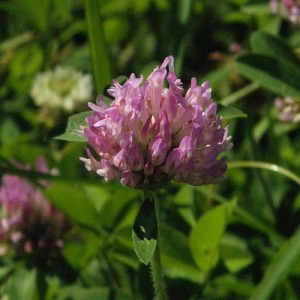 Red Clover should not be taken with Coumadin or other blood-thinning medication.

When gathering the herb in the wild, it is advisable to check the blossoms carefully to make sure they are not moldy, diseased, or sprayed.

Native to Europe, central Asia, and northern Africa, red clover was long ago naturalized in North America and Australia. The plant is a perennial herb, growing to sixteen inches, producing hairy upright stems and leaves with three or four leaflets with a white crescent marking. The flower heads consist of a mass of egg-shaped pink to purple flowers, and collected when newly opened in summer. It is widely cultivated for hay and as a nitrogen-fixing crop. It can readily be found growing wild in grasslands, roadsides, ditches, and hedgebanks and will quickly follow into freshly cultivated territory. It thrives in both dry soil or moist and flowers from May to September.

A a member of the bean family, red clover has a long history of being a nutritious cattle fodder, as well as a medicine.

Gerard knew it as meadow trefoil or “three-leaved grasse”. Its familiar three-lobed leaves were associated by medieval Christians with the trinity.

Pliny suggested using it with wine for urinary stones and recommended the root for dropsy.

In the 1930s, it was a popular anticancer remedy and may still be prescribed for breast, ovarian, and lymphatic cancer sufferers. A concentrated decoction was applied to the tumour site which, apparently, encouraged the tumour to grow outward and eventually clear the body.

The crescent markings across the clover leaflets were once viewed as a sign that the plant would help cataracts since, in accordance with the Doctrine of Signatures, a plant’s appearance indicates the ailments it treats.

A traditional cancer cure comes from the hills of Tennessee: “Place two or three teaspoons of red clover blossoms in a cup of boiling water, steep mixture until a tea is formed. Drink one cup a day”. This tea has also been used on heart disease, lung disease, and any other serious illness. A 1917 herb book, Health From Field and Forest, listed red clover as one of the best blood purifiers, especially in the case of cancer.

In Ireland, an old remedy for winter colds was to drink clover tea.

German Mennonites brought the plant with them to North and South America; and, to this day, it is still used to treat whooping cough, croup, and stomach cancer. The roots are used to treat diphtheria.

The Chinese revere red clover (Hsun Tsao) as a tonic, using the sap to treat colds and influenza. At one time in Chinese history, the dried plant was burned at altars as an incense.

The volatile oils in Red Clover are thought to have mild anti-inflammatory properties useful in treating eczema and other skin inflammations.

Its isoflavone compounds have estrogenic effects. Researchers have isolated four different isoflavones: genistein, daidzein, biochanin, and formononetin. Some contend that red clover is more effective than soy because it contains two extra isoflavones that soy does not have.

Contemporary Chinese researchers have proven that the herb kills certain viral and fungal infections, has an estrogenlike function, and is an antispasmodic and expectorant.

Freshly crushed flowers are applied to insect bites and stings.

Tinctures are taken internally for eczema and psoriasis.

Compresses are used for arthritic pains and gout.

Ointments are used on lymphatic swellings and made by covering fresh flowers with water and simmering in a slow cooker for forty-eight hours. This is strained, and the residue evaporated to semi-dryness then combined with an equal amount of ointment base.

An eyewash from diluted tinctures or a well-strained infusion is used to treat conjunctivitis.

A syrup made from the infusion is used for stubborn, dry coughs.

It is used mainly to treat skin conditions, and normally in combination with such purifying herbs as burdock and yellow dock.

An expectorant, it may be used for spasmodic coughs.

Its estrogenic effects may be of value in treating menopausal complaints. Like soybeans and other legumes, red clover is rich in isoflavone compounds which have effects similar to estrogen.