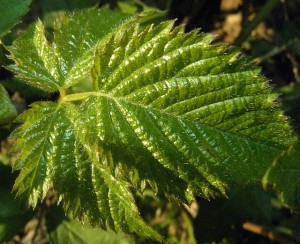 A member of the rose family, the raspberry is a deciduous perennial shrub, growing to six feet, producing woody stems with thorns. The pale green leaves are composed of three to seven leaflets. The flowers are white and turn into red or black, juicy fruits. Native to Europe, the plant can be quite invasive in some places, growing wild in woods, thickets, and pastures, on hillsides and roadsides, and often in dry, rocky sites. It is commonly cultivated in many temperate regions. The leaves are collected in early summer, while the fruits are gathered when ripe, also in summer.

The raspberry plant has long been a favorite household remedy, especially favored to speed childbirth.

Gerard considered the fruit to be of a temperate “heat” and, therefore, easier on the stomach than strawberries, which could cause excessive phlegm and chilling.

In 1735, the Irish herbalist, K’Eogh recommended using the flowers and honey for eye inflammations, fevers, and boils.

For centuries, Native Americans and Old World counterparts have used raspberry leaf teas and extracts to treat pregnancy related problems. The Chippewa and Omaha used the roots to treat such bowel problems as dysentery and diarrhea. The Appalachia used the roots of various Rubus species to make a tea that was drunk for hemorrhaging or hemophilia. When taken every three hours, it was also used for summer sickness and diarrhea. Bee stings were relieved by rubbing a leaf on the area.

In 1830, Constantine Rafinesque reported that there were nearly thirty wild species that were used to treat cholera, “infantum”, dysentery, and diarrhea. “The Cherokee chewed them for cough; a cold poultice useful in piles; used with lobelia for gonorrhea”. He also told of the ripe fruits being made into preserves, jams, jellies, and syrups that were used to treat other ailments. 19th century physicians also used the roots for the same purposes.

Raspberry leaf tea is taken during the last six to eight weeks of pregnancy to prepare for childbirth to strengthen the uterus, prevent miscarriage, and relieve morning sickness. During the final months, it is used to prepare the uterus for delivery and reduce labor pains. During labor, warm tea is taken to stimulate labor. Although the exact mode of its action is not known, the leaves are thought to strengthen the longitudinal muscles of the uterus, increasing the force of contractions and thereby hastening the birth.

Although generally considered to be a “female” herb, it is also used to treat men and children for such conditions as diarrhea, stomach upsets, edema, and lung congestion caused by colds or the flu.

Having astringent action, infusions of the leaves are useful in treating diarrhea, as a wash for wounds, and as mouthwashes for sore throats, and mouth ulcers. Eye washes are good for conjunctivitis. Tinctures are more astringent and are diluted to be used on wounds and inflammations. Lotions can be made from the tinctures for similar use.

The leaves are included in rheumatic remedies as a cleansing diuretic.

In France, the leaves are regarded as a tonic for the prostate gland.

The berries have traditionally been taken for indigestion and rheumatism.