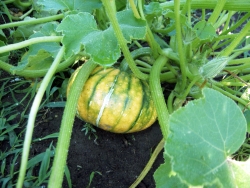 Indigenous to the Americas, pumpkins are now widely cultivated, especially in temperate climates. The pumpkin is an annual plant with twining stems, lobed leaves, yellow flowers, and large, orange fruits.

The fruit has long been used as a food and medicine in Central and North America. The Maya applied the sap from the plant to burns. The Menominee used the seeds as a diuretic. European settlers ground and mixed the seeds with water, milk, or honey to make a remedy to expel intestinal worms. This practice became so widespread in homes across North America that the medical profession eventually adopted it as a standard treatment.

The seeds are one of the most efficient vermifuges in the plant kingdom. They are particularly useful against taenia or tapeworms in pregnant women. They are also safely taken by children for whom stronger-acting and toxic preparations are unsuitable.

*For maximum effectiveness, the seeds must be taken in the correct manner. Fasting for twelve hours is recommended followed by a saline-based cathartic. This cleanses and disinfects the intestines of any remaining fecal matter and also weakens the tapeworm. Two ounces of seeds are then crushed and added to 3/4 pint of milk that has been sweetened with 1/2 ounce of honey and 1 ounce of cane sugar. One-third of this mixture should be swallowed every two or three hours and after the last dose, a moderate amount of Castor oil should be taken (Hallowell). For those who cannot tolerate milk, try soy or almond milk.

The seeds are mildly diuretic and have been used in Central American medicine as a treatment for nephritis and other urinary system problems. Certain varieties of pumpkin that are particularly diuretic, tonic to an irritable bladder, and high in zinc have been recommended in the early stages of prostate problems. However, they do not reduce prostate enlargement.

Decoctions from the pulp are used to relieve intestinal inflammation or applied as a poultice or plaster to burns.