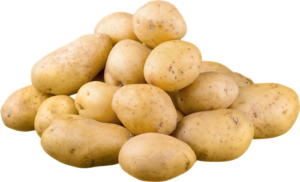 Native to Chile, Bolivia, and Peru, the potato plant has been developed into hundreds of varieties that grow around the world today. The perennial grows to about three feet in height, producing branching stems with compound leaves, white or purple flowers, green berries, and swollen tubers, which are harvested in the fall to early spring.

Many different potato species and varieties have been cultivated by the Quechua and Aymara peoples of the central Andes. By the early 16th century, the potato was introduced into Europe by the Spanish, who found them in the New World. However, it was not until the 18th century that it became a staple foot in Europe.

Although potato water has no established medicinal benefits, it does make a good silver cleaner.

The main therapeutic use of the potato is for healing wounds. Internally, potato juice is taken to treat peptic ulcers, bringing relief from pain and acidity. Externally, poultices are made from the mashed pulp and applied to painful joints, headaches, backaches, skin rashes and inflammations, hemorrhoids, and to draw out foreign objects such as slivers.

Potato skins are used in India to treat swollen gums and to heal burns.

The root of the Brazilian, S. insidiosum, is used as a diuretic and stomach-supporting remedy.