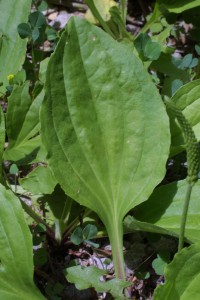 The plant is indigenous to the Mediterranean region and western Asia; but it now grows worldwide, especially in India, Afghanistan, Iran, Israel, northern Africa, Spain, and Canary Islands. The plant is cultivated mainly in India and neighbouring countries, Spain, central Europe, Cuba, Arizona, and Southern Brazil. To many areas, it is considered a weed. The herb is an annual that grows to about sixteen inches in height, producing narrow leaves and clusters of tiny whitish-brown flowers.

The Anglo-Saxons considered it an important healing herb.

Of the species growing wild in Mexico and the southwestern US, several are native, while others are escapees from gardens. These garden plants were brought to Mexico from Chile, Argentina, and Peru by the Spanish.

Pliny suggested that, if several pieces of flesh were put in a pot with plantain, it would join them back together again.

The seeds been used as a laxative for thousands of years in Europe, North Africa, and Asia. Given their small size and colour, the husks and seeds have often been mistaken for fleas and hence their nickname of “fleaseed.”

Psyllium seeds were considered a high-fiber food that was part of the Aztec diet, and still used today by many people.

The Pennsylvania Dutch extracted juice to soothe tired and abused feet, treat insect bites, and lessen the pain of hemorrhoids. They also found that the seeds were effective in ridding intestinal worms.

In North Carolina, the plant was placed on the wrist of a feverish person; and, when it turned brown from the heat of the body, the person would be cured.

The gypsies of Eastern Europe had an effective hemorrhoid cream recipe that included plantain, ground ivy, and lard, which were boiled and the ingredients pressed to obtain all of the plants’ powerful substances. Once cooled, the cream was liberally applied to the area. The Maoris of New Zealand treated the same area by placing the plant in a steaming pot of water and hanging the “affected part” over the pot.

Gerard advocated using an infusion as a wash for sore throats, gums, or “privy parts” of man or woman. He was likely referring to the high rates of venereal disease common at the time. The plant is still used on herpes sores.

In ancient times, the plant had a prominent place in many herbals. Dioscorides and Pliny recommended it for such things as malignant tumors, ulcers, bronchial disorders, fevers, infected wounds, bites, and pustulous inflammations.

The plant has long been recognized as possessing antibiotic properties; and, until the turn of the 20th century, people were still pulverizing the leaves and, along with a pinch of salt, using the herb on rat-bites and other potentially dangerous wounds. An old Roman remedy used it for boils.

Clinical trials during the 1980s in the US, Germany, and Scandinavia showed that psyllium has both a laxative and an antidiarrheal action, as well as having the ability to help restore normal function of a body organ.

In recent years, study of the herb has found it to be useful in two main areas of treatment, as an expectorant and as an external antiseptic. As an expectorant, where up to 10% of the plant may be mucilaginous, plantain is aided by the glycoside aucubin to produce this action. Therefore, the herb is a successful remedy for coughs, and such related ailments as bronchitis. Several Russian pharmaceutical companies have invested large sums in cultivating the plant so as to have an adequate supply of its active ingredients.

Juice from the fresh leaves is taken for inflamed mucous membranes, especially with cystitis, diarrhea, and lung infections.

Tinctures are preferably made from the fresh leaves and used for heavy mucus and allergy rhinitis, or if astringency is needed.

Poultices are made from the fresh leaves and applied to bee stings and slow-healing wounds.

Ointments are used for wounds, burns, and hemorrhoids.

Washes from the diluted juice are used for inflammations, sores, and wounds.

Gargles from the diluted juice are used for sore throats or mouth inflammations.

Syrups are made from the juice and used for coughs particularly when the throat is sore or inflamed.

An infusion from the seeds is used for urethritis.

The husks are often powdered and used in a variety of preparations.

Today, the Plantago lanceolata species is the most used in herbal medicine, although P. major is still used as a first-aid remedy for bee stings.

The black seeds of P. psyllium and the pink seeds of P. ovata are used for the commercially prepared bulk laxatives. Fresh seeds must be soaked in water before they are used to correct constipation. Because of its gelatinous consistency, psyllium maintains a high water content within the bowel, thus increasing bulk in the stool, making it easier to pass and invaluable for those prone to hemorrhoids.

The seeds are also used for healing wounds and such skin infections as boils and carbuncles.

The husks can be soaked in an infusion of calendula and used as a poultice to draw infection out of boils, abscesses, and other pus-filled infections.

In the Louisiana bayou, the fresh leaves were traditionally applied to sores to promote healing, while the dried leaves were put in linen closets to keep insects away.

The Chinese have long used plantain to stop potentially fatal diarrhea in children. They also used the plant for a healthy childbirth, especially in those where the fetus is in the wrong position. In such cases, plantain is credited with a 90% reversal rate in position leading to a normal presentation at birth.

The plant has received much attention in Burma, where it is used to treat high blood pressure, as well as the common sores and fevers usually found in tropical places. Their scientists have spent much time in researching the plant and have found some interesting facts. Plantain, whether in water or alcohol solutions, does cause a drop in arterial pressure in dogs. They have also determined that a substance, plantaglucide, cuts down on the formation of ulcers. In addition, substances appear to increase gastric juices which reduce intestinal contractions, alleviating stomach pain. Since the plant contains mucilage, particularly in the seeds, it is useful in collecting toxins in the intestine and moving out the soft feces.