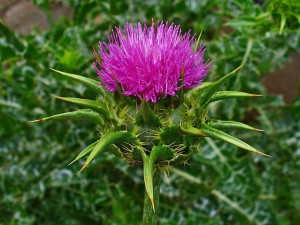 Although milk thistle herb is very effective in treating liver conditions, liver disease is always a serious medical condition and should never be self-treated. When silymarin is used, it requires frequent liver-function tests to ensure that it is actually working properly.

Native to the Mediterranean, it now grows wild throughout Europe and is widely naturalized in North America and Australia thriving in open areas. To many, it is considered a noxious weed; but, to others, it is cultivated as an ornamental plant. Farm animals, especially hogs, love it. Birds, particularly finches, relish the seeds and line their nests with the soft thistle down.

A spiny biennial, milk thistle grows to five feet, producing white-veined, spiny leaves, a milky sap, and purple head flowers. The small leaves are gray-green and arranged at different levels along the stem. The flower heads are picked when in full bloom in early summer, and the seeds are collected in late summer.

The herb has been used in Europe as a remedy for depression and liver problems for thousands of years. Modern research has confirmed this ancient use, proving the remarkable ability of the herb to protect the liver from damage resulting from alcoholic and other types of poisoning.

It was long considered an excellent herb for “melancholia”, which was traditionally associated with the liver, and confirmed by Gerard in his Herbal of 1597.

Silybin and Silymarin are powerful antioxidants that have been shown to protect against liver damage while stimulating the regeneration of damaged liver cells. Silymarin speeds recovery from liver inflammation that may be caused by viruses, medications, and such toxic substances as alcohol.

Silymarin has shown promise in preventing the formation of gallstones by reducing cholesterol levels in the bile.

Silymarin research was conducted by German scientists in the 1970s. It was shown that severe liver breakdown, resulting from deathcap (Amanita) mushroom poisoning, was prevented if taken within forty-eight hours of ingestion. In Germany, silymarin has also been successfully used to treat hepatitis and liver cirrhosis.

Decoctions of the seeds are used for liver infections.

A tincture of the seeds is prescribed for chronic liver conditions, although the alcohol must first be removed.

Capsules of the seeds are used to treat hangovers.

Tablets are prescribed for long-term treatment of liver disorders.

Milk Thistle is the main remedy used in Western herbal medicine to protect the liver. Its many metabolic activities help renew its cells. It is particularly helpful in treating conditions where the liver is under stress caused by infections, excess alcohol, and chemotherapy. It is also prescribed to treat such diseases as hepatitis, cancer, chronic liver necroses, cirrhosis, and hepatitis A and B. It has been found to speed up recovery from chemotherapy, while limiting the damage done to the liver. Although other herbs are used for liver conditions, they have a lesser beneficial effect, including that of Holy Thistle (Cnicus benedictus) and the Globe Artichoke (Cynara scolymus). Milk Thistle is considered superior in treating liver disorders.

The flower heads can be boiled and eaten like artichokes, and are a useful spring tonic when people have been deprived of vegetables over long winters. Young thistle leaves, shoots, stems, and roots are all edible and good sources of flavonoids, vitamin C, iron, and other minerals.