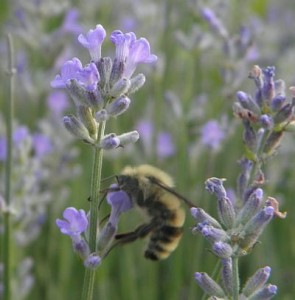 Avoid high doses during pregnancy as it is a uterine stimulant.

Lavender contains limonene which can cause photosensitivity, especially when perfumes and cosmetics are used containing lavender oil.

Full-strength lavender oil should not be applied directly to the skin, but should be diluted in a carrier, or neutral, oil.

Native to France and the western Mediterranean, it is now cultivated worldwide for its volatile oil. It is grown as a garden plant as far north as Norway. Lavender is a perennial shrub, growing to about three feet, producing spikes of violet-blue flowers that extend above the foliage. Some varieties have flowers of pale pink, dark purple, white, or magenta and are harvested toward the end of flowering season when the petals have begun to fade. They are generally picked by the end of July to obtain maximum strength in its essential oils, with sixty pounds of flowers yielding about sixteen fluid ounces of oil.

One of the most popular medicinal herbs since ancient times, its name is derived from the Latin lavare, meaning to wash. The Greeks and Romans were fond of it in their bath water.

Since ancient times, the oil has been used to kill lice and fleas and as an embalming fluid.

In Arab medicine, it was used as an expectorant and antispasmodic

In European folk medicine, it was regarded as a useful wound herb and a worm remedy for children.

It became popular as a medicine during the late Middle Ages and taken to the New World by Pilgrims in 1620.

As a strewing herb, lavender was popularly used to mask the smells of households and streets.

The glovers of Grasse used the oil to scent their fashionable leather and were remarkably free of the plague. This encouraged others to use the herb to ward off the pestilence.

The medical properties of lavender have been noted in the earliest English herbals and in the British Pharmacopoeia for about 250 years.

Linalyl ester is the major component of bergamot and is also responsible for the aroma and medicinal qualities of the plant.

Tannins have antibacterial properties that are useful in treating minor skin wounds.

An infusion from the flowers is taken for nervous exhaustion, tension headaches, during labour, for colic, and for indigestion. A weak infusion (25% normal strength) is given to babies for colic, irritability, and excitement.

A tincture from the flowers is taken for headaches and depression.

Creams made from the essential oil are used on the skin and are made by adding a few drops of oil to another cream, as chamomile cream, for eczema.

A lotion is made in the same way, only adding a little of the oil to water for sunburns and scalds.

A chest rub is made with essential oil, chamomile oil, and a carrier oil for asthma and bronchitis spasms.

The essential oil can be diluted in water and used on the hair to treat lice or placed on a fine comb for nits.

A massage oil is made by adding a little essential oil to a carrier oil and massaging into painful muscles or the temples and nape of the neck for tension headaches or the first hint of a migraine.

The essential oil can be diluted and used for insect bites and stings, or mixed with a carrier oil to prevent sunburn and to treat heatstroke. However, it is not meant to be a sunblock, and does not function as one.

Lavender is well-known for its soothing and calming effect; and, when combined with other sedative herbs, relieves insomnia, irritability, headaches, migraines, and depression. Medicinally, lavender has many uses, especially in aromatherapy, and is used by midwives, massage therapists, and some hospitals.

It is also used to treat asthma and, through its relaxing effects, is especially effective when excessive nervousness is the trigger.

The essential oil is strongly antiseptic and a valuable first aid remedy helpful in treating minor burns, wounds, and sores. It is also effective on insect stings as it relieves the pain and inflammation.

The dried flowers are often hung in rooms to perfume the air and repel moths and other insects.

When placed near or inside a pillow, dried lavender helps promote a restful sleep. A few drops in the bathwater can relieve tension and mild depression, while promoting sleep.

Added to cool bathwater, it becomes an energizing stimulant.

Drops of lavender oil are sometimes added to water and used as an astringent for cleaning the face and treating acne.

In Mexico, lavender is used in a tea to treat indigestion, and burned in a type of aromatherapy. Smudge sticks are made from bundles of the plant and burned to fumigate sick rooms. New mothers are purified with it after childbirth.

In Spain and Portugal, L. stoechas is used as an antiseptic wash for wounds, ulcers, and sores; but its oil is inferior to that of L. officinalis. Although L. spica (Spike lavender) yields more oil than L. officinalis, it is also of an inferior quality.

The English and French varieties are especially prized for their essential oils, which are used in perfumes, cosmetics, skin care products, and air fresheners.