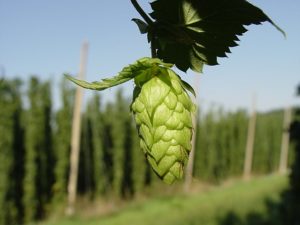 Related to the hemp plant (Cannabis sativa), hops is a tall, climbing perennial that flourishes in the wild on dumps and along roadsides. It is widely grown commercially throughout northern Europe, Asia, and the US, as well as in other temperate regions. The green stems (bines) are pencil-thick and covered in six rows of climbing barbs. They do not turn woody and can be trained to grow up raised wire runners to more than thirty feet. The male flowers are yellowish-green and inconspicuous, while the female flowers are richly blossomed, producing a yellowish fruit. The plant has a very strong odour and an extremely bitter taste.

Much like its relative, the hemp plant, when hops was first used to brew beer in England in the 16th century, it aroused great opposition and a petition to Parliament described it as a “wicked weed” that would “endanger the people”. However, unlike hemp, hops does not carry the same versatility or nutritive value.

Its bitter taste is well-known to beer drinkers, and has been cultivated for such since at least the 11th century.

Native Americans, including the Algonquin and Mohegan, used the blossoms to treat nervousness. The Fox and the Cherokee used the plant as a sedative, and the Mohegan used a blossom infusion to relieve toothache.

A number of constituents, including valerianic acid, have a sedative action.

Lupulon and humulon possess antiseptic and antibiotic properties which have proven to be effective against Staphylococcus aureus.

Some components are thought to depress central nervous activity.

The fruit is used to help relieve pain and fever and as an effective diuretic.

Its bitter principles strongly stimulate the digestive system, increasing gastric and other secretions. It also has an estrogenic effect that relaxes smooth muscle, easing the grip of colic.

Hops is probably best known as an additive that helps preserve beer, but this herb has long been used as a sedative. A sachet placed inside a bed pillow releases an aroma that calms the mind and helps to reduce irritability and restlessness, while promoting a good night’s sleep. However, its sedating action is thought to stem more from the alcohol concentration reached in the drying process. To make a hops pillow: Gather enough of the dried heads to fill a small pillowcase or cloth bag. First, place the hops in a glass bowl and lightly sprinkle them with a solution of water and a touch of glycerin. This will minimize the noise made by the dried hops. Secondly, return the hops to the pillowcase or bag and tie or sew it closed.

Its antispasmodic action makes it useful with certain types of asthma and for menstrual pain.

When blended with other herbs, hops is good for stress, anxiety, tension, and headaches although it should not be used if depression is a factor.