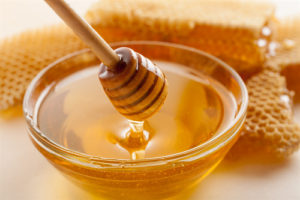 Although not an herb, honey is a plant by-product and used medicinally around the world. It is an integral part of herbs and just as healing. However, only wildflower honey should be used as the clover or alfalfa honey, common in grocery stores, comes from heavily sprayed crops and does not have the broad-spectrum healing activities found in the natural honey obtained from multiple-plants that have not been sprayed with various chemicals. In addition, many commercial honey growers supplement their bees’ food with sugar, as well as adding it to the final product, which dilutes the medicinal action of the honey. In good, strong, medicinal type honey, it should slightly burn or sting the back of the throat when taken undiluted.

There are three instances where honey can be harmful.

Many people are under the impression that “bees make honey”. They actually collect the nectar made by plants and process that nectar into what we know as honey. Plants produce the nectar in glands located in the center of flowers, which pump out liquid sugars made in the leaves. The bees collect the nectar by sucking up the liquid into their stomachs and fly back to the hive to regurgitate the nectar into the empty cells of the honey comb. Other bees then fan the collection to evaporate the water contained in the nectar until it becomes one-quarter of the original size. Still other bees produce wax and seal the cells after the evaporation process. Along with the sugars produced in the leaves, honey contains other ingredients characteristic of individual plant species, making it light or dark with varying flavours, depending on the plant from where the nectar was collected.

Prehistoric cave paintings show that honey was used as both a food and a medicine. Pictures from Switzerland and Spain also depict men hanging down cliffs in order to gather honey from beehives. One Spanish picture shows a man with his hand in the hive while out-of-scale bees swarm around him.

The earliest written records, dating from 4000 BCE, indicate that the Egyptians were loading hives on boats and sailing up the Nile to places where flowers were beginning to bloom. Their large numbers of papyrus scrolls and hieroglyphic tablets indicate that the Egyptians were very fond of honey. The bee was their symbol of power and health and was put in on everything from architecture to jewelry. At least one pharaoh had a bee stamp which was placed next to his signature on official documents. Egyptian doctors saw honey as the ultimate healing substance.

Honey found in an excavated tomb of more than 3,000 years ago, showed that it was perfectly usable.

No one knows exactly how or why, but honey is a natural bactericidal. This is one reason that bomb shelters, during WWII, were stocked with honey and wheat germ. People could survive indefinitely on these two items alone, and their food supply would not spoil.

Greek bees still produce some of the best honey in the world collected from wild mountain thyme and oregano.

During the Middle Ages, straw hives were often kept on the walls of fortified cities where bees would come after collecting honey in the surrounding countryside. In cases of attack, the city’s defenders could hurl the hives down on attackers’ heads. They used the excitable black bees of northern Europe. Once inside the helmet of an armor-clad knight, the battle was often decided right then and there.

One pound of average wildflower honey contains more than seventy-five different compounds including the following:

Many in Europe attribute their longevity to honey which, to the westerner, seems incredible since it is only “sugar”. However, honey is no ordinary sugar as it also contains the substances from the original plant, making it vastly more healing. Schar describes a trip to northern Spain where he found a honey seller whose shop offered more than twenty different kinds of honey classified according to the various plants from where they were collected; and, beside each, there was a listing of its medicinal uses. For example, the honey collected from sage plants was to be used for bronchial infections, while that collected from thyme was best for bladder infections and weaknesses.

Honey has been used effectively in clinical settings for the treatment of fist-sized, decubitus ulcers extending to the bone, as well as for first, second, and third degree burns. Complete healing has been reported without the need for skin grafts and with no infection or muscle loss. It can be applied full strength to such conditions, covered with a sterile bandage, and changed daily. Poultices can also be used to draw poisons from bites and stings and to clean or infected wounds. A thick layer is needed to draw effectively; but, if it is too thin, it can be thickened with cornstarch. When the wounds are clean, honey acts as a healer. This also is the same procedure for infected wounds, ulcerations, and impetigo. Garlic honey can also be applied directly to infected wounds which will help clean up the area of infection.

As an antiseptic, honey is also a drawing agent for poisons or infected wounds and has outperformed antibiotics when it came to treatments for stomach ulcerations, gangrene, surgical wound infections, surgical incisions, and the protection of skin grafts, corneas, blood vessels, and bones during storage and shipment.

It is exceptionally effective in respiratory ailments. One Bulgarian study of almost 18,000 patients found that it improved chronic bronchitis, asthmatic bronchitis, chronic and allergic rhinitis, and sinusitis.

It is an effective treatment for colds, flu, respiratory infections, and a generally depressed immune system. Whereas sugar shuts down the immune system, a good quality honey will stimulate it into action.

Honey is often added to herbal teas and syrups, not only to make them more palatable, but for added healing power. The sugars in honey are predigested, making them easily available as energy to the weakened body.

Honey used from the immediate vicinity will help cure allergies to plants.