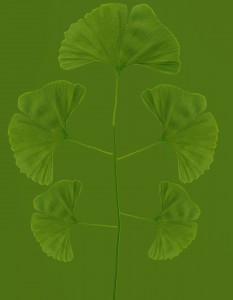 Native to China, and possibly Japan, the trees are now grown on large plantations in France and South Carolina, as well as China. Ginkgo is a very slow-growing, hardy tree whose fossil records date back some 200 million years. Growing to a height of 50 to 120 feet, the trunk of the Ginkgo is light green to light brown with corky fissures. In the male trees, the grooves in the bark are broad, while in the females, they are pointed. Both have green, leathery fan-shaped leaves that turn yellow to golden in the fall.

The tree flowers for the first time when it is between twenty and thirty years old. The male flowers are small, green catkins, while the female flowers are small, green, and globular-shaped, which form into small, plum-shaped, foul-smelling fruits. The tree grows in fertile, well-drained soil in sun or light shade. The leaves are harvested either mechanically or by hand from plantations or in the wild. The leaves are then dried and pressed into balls. A dry extract is manufactured from the dried leaves, using acetone and water and subsequent purification steps without the addition of concentrates or isolated ingredients.

During the Ice Age, every member of the Ginkgoceae family was destroyed, except the ginkgo biloba tree — in part, due to its extraordinary resistance to insects and disease. It has survived more than 200 million years, and is generally believed to be the oldest species on earth.

Ginkgo Biloba has been used by the Chinese for thousands of years to improve circulation thereby improving the delivery of necessary nutrients and life-giving oxygen to every cell, including those of the brain.

It was not introduced into Europe until 1730.

In the 1930s, flavonoids in the leaves were first identified.

Seeds are roasted and used in China for coughs and asthma, and for urinary problems. They are pleasant tasting to eat, although the husk must first be removed from the seeds.

Leaves, fresh or dried, are used to improve circulation, especially to the brain, and to maintain a plentiful blood flow to the central nervous system. They are the base to make tinctures, tablets, and fluid extracts.

Tablets are taken for poor circulation and memory loss.

Decoctions of the seeds are used to treat wheezing or, when combined with ma huang, elecampane, or mulberry leaves, to treat asthma or severe and persistent coughs.

Fluid extractions from the fresh leaves are used for asthma and in Europe, and is marketed for treating cerebral arteriosclerosis and peripheral circulatory diseases.

Tinctures from the leaves are used with such other cardiovascular herbs as greater periwinkle and limeflower for circulatory problems or with kings clover for venous disorders.

Infusions are taken to treat arteriosclerosis and varicose conditions.

Washes are used on varicose ulcers or hemorrhoids.

Ginkgo is commonly used to preserve memory, treat mild depression, and reduce symptoms of early Alzheimer’s Disease and other cognitive disorders, improve circulation and treat leg pains due to reduced blood flow, reduce the risk of blood clots, treat such inner ear disorders as tinnitus and vertigo, and treat allergies, asthma, and inflammatory disorders. Benefits usually begin about three weeks after initiating the herb, but six weeks is not uncommon; and improvement may not be noticed for several months, with benefits increasing over time.

The primary benefits of ginkgo seem to derive from its ability to promote the dilation of blood vessels, which improves blood flow throughout the body. This prevents the buildup of fluid (edema), reducing a wide range of disorders affecting the legs, brain, eyes, ears, and other organs.

In addition, it seems to inhibit the formation of blood clots and functions as an antioxidant, reducing the cellular damage caused by free radicals. It may also affect such brain chemicals (neurotransmitters) as norpinephrine, serotonin, monoamine oxidase, acetylcholine, and nitric oxide, as well as inhibiting the synthesis of corticosteroids.

In China, the seeds are used to relieve wheezing and to lessen plegm, as well as treating vaginal discharge, a weak bladder, and incontinence. The leaves are also used for treating asthma.

Ginkgo has been shown to enhance energy and reduce depression.

Today, Ginkgo is the best selling herbal medicine in France and Germany, where it is taken on a daily basis by millions of people, and likely the most useful herb for the treatment of senile dementia.