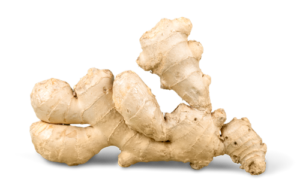 Native to southeast Asia, ginger is now cultivated in the US (including Hawaii), India, China, the West Indies, and other tropical regions. Ginger root is a tender creeping perennial from the tropics that grows to about four feet high, producing thick, aromatic, fibrous, knotty, buff-coloured tuberous rhizomes. The stems are erect and annual with long, narrow, lance-shaped leaves. The plant can produce stalks of sterile, fragrant, white or yellow flowers. The root of the Chinese ginger does not separate as easily from the skin as does the Jamaican variety. The rhizome is unearthed when the plant is about ten months old.

Ginger has an ancient history as a culinary and as a medicinal herb, and has been used in the West for at least 3,000 years.

Ginger was well-known to the Greeks and Romans, who used it extensively. Arabian traders took it to them by way of India and the Red Sea. By the 11th century CE, it was a common trade article from the East to Europe.

Medieval Europe thought it came from the Garden of Eden.

Chinese and Ayurvedic practitioners have relied on ginger for at least 3,000 years for its anti-inflammatory properties, and have used it as a “carrier” herb, one that enables other herbs to be more effective in the body.

Jamaicans and early American settlers made beer from it; and today, natural ginger ales made with fresh ginger are available as a digestive tonic. These should not be confused with most commercial brands of ginger ale as these contain so little ginger that they are nothing more than sweetened soft drinks with no medicinal value.

Scientifically, almost all of the folk beliefs have been verified. Ginger does prevent motion sickness, thin the blood, elevate low blood pressure, lower blood cholesterol, and prevent cancer in animals.

Extracts are reported to exhibit numerous pharmacological properties, including stimulating the vasomotor and respiratory centers and lowering serum and hepatic cholesterol levels.

Chinese researchers have reported that fresh ginger is highly effective in the clinical treatment of rheumatism, acute bacterial dysentery, malaria, and inflammation of the testicles.

Gingerol is an acrid component, responsible for most of its hot taste and stimulating properties.

The shagaols form as the plant dries and are more strongly irritant.

Ginger is not only effective for motion sickness, but it has proven to be useful in relieving postoperative nausea in trials conducted at St. Bartholomew’s Hospital in London in 1990.

According to the British medical journal Lancet, ginger seems to be more effective than some standard drugs in treating motion sickness and dizziness. They said that volunteers who took ginger were able to endure artificially created seasickness in a mechanical rocking chair 57% longer than those who used Dramamine. Another study involved Danish naval cadets prone to seasickness. The ones taking ginger were less likely to develop symptoms than those on a placebo. Typically, other studies showed the opposite effect where ginger actually induced nausea and vomiting.

Zingibain is an enzyme in ginger that has anti-inflammatory properties. There are also many antioxidants that counter inflammation as well. Other components reduce production of certain prostaglandins, thereby easing pain.

Gingerols, the substances that give ginger its pungency, are thought to be responsible for its usefulness in treating fever and pain. Its volatile oils may be natural killers of cold and flu viruses.

It is also used in controlling and relieving the nausea after chemotherapy treatments. Researchers in India, in 1997, tested this ability and found that ginger was able to increase the rate of endurance. They have found that the acetone extracts collectively known as gingerol, were responsible for increased bile production, indicating that it plays an important role in digestion and food absorption.

Some migraine sufferers reported that ginger aborted a headache if taken during the early stages. The theory is that this ability comes from substances called shogaols and gingerols, which reduce platelet clumping, thus preventing the blood-vessel inflammation that causes migraine pain.

A decoction of the fresh root is used for chills and phlegmy colds (1-2 slices per cup of water and simmer 10 min. Cinnamon can be added).

A decoction of the dried root is used in combination with other herbs as a restorative for yang, or spleen energies, for abdominal fullness, nausea, and excess phlegm.

Tinctures of the fresh root are used as a warming circulatory stimulant, flatulence, indigestion, and nausea.

Capsules are made from the powdered dried root. These are a convenient way to take the herb before travelling or for morning sickness.

Essential oil is used for massages for rheumatism, lumbago, or for bone injuries and combines well with almond oil, juniper or eucalyptus oils for this purpose. It can also be used to treat flatulence, menstrual cramps, nausea, or stomach upsets but must be administered by a knowledgeable herbalist.

The ginger family includes not only the official ginger but also cardamom, tumeric, and zedoary. Various Zingiber species are used medicinally but do not equal ginger for benefits, including that of Turmeric, a close relative. In Asia, all members of this reedlike family are considered good for the health. The Arabs use two other members of the same family, galanga (Alpinia officinarum) and zedoary (Curcuma zedoaria) for treating stomach ailments and general weakness. The roots of these two plants are considered to be stimulants, aphrodisiacs, and, amazingly, a cure for amnesia. Pounded with olive oil, they are added to a hot bath or rubbed onto the body for any form of muscle complaints caused by overexertion. In North Africa, this usually comes from plowing; but, in the western world, it is likely to result from overexertion at the gym.

In China, the science of ginger is so exacting that ginger from different parts of the country are used for different purposes. Fresh ginger is used to cure coughs, nausea, gas, and dysentery, as well as treating fevers and mushroom poisoning. Dried ginger is used for all things that the fresh ginger is used for, as well as for hemorrhages, pervered lochia, constipation, and urinary difficulties. A natural diuretic, ginger stimulates the kidneys to flush out toxins faster. The fresh root is used mainly to promote sweating and to reduce fevers while warming and soothing the body during coughs, cold, flu, and other respiratory problems. It is also an expectorant for colds and chills.

In India, ginger is used to treat chronic rheumatism in this manner. The patient drinks an infusion of ginger before going to bed, and is then covered heavily with blankets to encourage copious perspiration. This same treatment is considered beneficial in cases of colds or catarrhal attacks and during the cold stage of intermittent fevers.

The essential oil has been used in both Eastern and Western medicine for at least 400 years. In France, it is still prescribed in drops on sugar lumps for flatulence, fevers, and to stimulate the appetite.

Ginger is an excellent remedy for all manner of digestive complaints, especially nausea, gas, and colic. In Mexico, ginger is considered to be more effective than Dramamine in combating motion sickness.

In Venezuela, ginger is pounded into a paste and applied to the abdomen for difficult menstruation. In Costa Rica, it is used in a decoction to relieve throat inflammations and asthma. With the addition of honey, it is a valued remedy for coughs and bronchitis, and also serves as a sudorific in fevers.

In Panama, it is said to relieve rheumatism. In Guatemala, ginger decoctions are taken as a stomachic and tonic. In Trinidad, it is a remedy for indigestion, stomachache, and malaria. Tthe fumes from an infusion in urine are inhaled to relieve head colds.

Its antiseptic qualities make it a highly beneficial remedy for intestinal infections, including some types of food poisoning.

Western herbalists regard it as a good circulatory stimulant, helping blood flow to the surface and making it a valuable remedy for chilblains and poor circulation to the extremeties. By improving circulation, ginger also helps high blood pressure.

Since it stimulates peripheral circulation, it is warming to the extremeties and helps prevent the kinds of chills associated with malaria, colds, and flus.

One of its more unusual uses is for burns. When used externally in a poultice or as an ointment, ginger soothes inflammation and promotes healing. The juice of fresh ginger, soaked into a cotton ball and applied to a burn, for example, acts as an immediate pain reliever (even on open blisters), reduces blistering and inflammation, and provides antibacterial protection against infection.

Some herbalists recommend mixing fresh ginger juice with a neutral oil and applying it to the scalp to control dandruff; and mixed with lemon juice, vinegar, and honey, ginger makes a soothing gargle for a sore throat.

Wild ginger is specific for painful cramping of the bowels and stomach.

To make homemade ginger ale: Take fresh ginger and flatten the unpeeled root. Place one cup of the flattened root in a gallon of water and bring to a rolling boil. Remove from the heat, strain, and add honey to taste. It can be drunk as is or added to carbonized water.