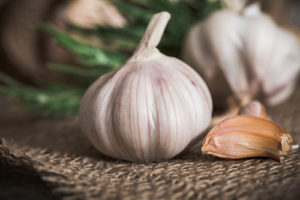 Originally from central Asia, garlic has long since spread worldwide. It is a perennial of the onion family, growing to more than a foot high and producing an erect, rigid stem and long, flat leaves with a wedge-shaped tips. The plant also consists of a cluster of long flowers that usually remain in bud and often do not produce any seed. The bulb is compound, consisting of numerous sections called cloves, which contain a volatile oil valuable in herbal medicine and in culinary dishes.

Garlic has been used as a food and medicine for thousands of years to treat all manner of diseases, and was the accepted remedy for colds, flu, coughs, ringworm and such fungal infections as swimmer’s ear and athlete’s foot, intestinal worms, fever, digestive disorders, and any lung problem. When made into a cough syrup, garlic does speed the healing process of these infections, including the common cold.

An Egyptian medical papyrus dating from about 1500 BCE lists twenty-two garlic prescriptions for such complaints as headaches and throat disorders.

The Arabs, Chinese, and Indians have so many uses in their medical practices for garlic that it is impossible to list them all. The ancient Israelites were familiar with sixty-seven different kinds of garlic and onions.

Pliny listed more than sixty uses for the herb, including driving away scorpions and curing asthma and epilepsy.

Its antibiotic effects were first studied by Louis Pasteur in the mid-19th century. In the 20th century, Albert Schweitzer used it to treat amebic dysentery in Africa.

In WWI, garlic was used to fight typhus and dysentery, while in WWII, British physicians treated battle wounds with garlic. They reportedly had total success in warding off septic poisoning and gangrene when penicillin and sulfa drugs were in short supply.

It is said to have been used to produce energy in the workers who built the Great Pyramid, but it was also to keep them healthy.

The Aztecs used an indigenous variety of garlic as a seasoning and a remedy.

Constantine Rafinesque reported in his 1830 Medical Flora of the United States that the Cherokee used several species of wild garlic in their cooking and made tinctures for treating “the gravel”.

The Shakers in the late 1800s in the US used garlic to relieve all manner of illnesses.

The “root doctors” of the Louisiana bayou recommended garlic for “live things jumping around in your stomach”. In other words, for all manner of worms and amoebas — and still used today by them.

Garlic, ground with animal fat, was the leading antiseptic ointment used by many cultures, including Native Americans.

In the rural Tennessee mountains, wild garlic was collected as a spring tonic. In rural North Carolina, garlic was eaten for boils and pneumonia.

The Pennsylvania Dutch used wild garlic, which they called “wilder knowwelloch”, to bring boils and ulcers to a head by putting it directly on the eruption. Inflamed bowels were treated by applying a mash of wild garlic and bran to the stomach. A tea made of the same was used as a liver tonic.

The herb stimulates the immune system by enhancing natural killer cells (NK), important in fighting cancers and a multitude of harmful microorganisms. Garlic’s antimicrobial properties may derive from allicin’s ability to block the enzymes that normally allow these organisms to invade body tissues. Garlic has proven effective against Tuberculosis bacteria, Shigella dysenteria, Staphylococcus aureus, Psudomonas aeruginosa, Candida albicans, Escherichia coli, Streptococcus, Salmonella, Campylobacter, Proteus mirabilis, herpes simplex, influenza B, HIV, and many others of both gram-positive and gram-negative bacteria, as well as viruses, fungi, and parasites. Garlic juice diluted to as little as one part in 125,000 has been found to inhibit the growth of bacteria. Studies have also proven garlic to be effective against antibiotic-resistant strains.

The sulfur and hydrogen compounds combine to form potent chelators of toxic heavy metals, binding them sothat they can be excreted, and protecting against free radicals. Sixteen separate studies have found that garlic inhibits the development of tumors, even in those exposed to such carcinogenic materials as carbon tetrachloride, isoproterenol, and heavy metal poisoning. But other studies have indicated that once the tumor has developed, garlic does not inhibit its growth. Therefore, prevention seems to be its key role.

Despite its antimicrobial qualities, researchers today are concentrating on its ability to reduce the risk factors associated with heart disease. Garlic appears to lower the risk of heart attack and stroke by inhibiting the ability of platelets to clump together to form clots. It also contains polyphenol, which helps prevent the formation of plaque, the fatty substance that collects along the artery walls. It is thought to help lower blood pressure by relaxing the smooth muscles that control artery walls, thereby allowing the vessels to open wider and carry more blood with less pressure.

The key therapeutic ingredient in garlic is alliin, which is converted to allicin and other compounds when the bulb is crushed or ingested. Allicin contains sulfur and sulfur compounds that are responsible for its odor, as well as for such derivative compounds as ajoene, methyl ajoene, and dithiins. Allicin is said to be stronger than penicillin and tetracycline, and microbes do not mutate when repeatedly exposed to garlic.

Some studies have indicated that garlic’s sulfur-containing compounds inhibit the stiffening of the aorta in the ageing population, but researchers remain skeptical despite the fact that population studies in Italy and Spain where large amounts of garlic are consumed show that atherosclerosis is uncommon, despite a high-fat diet.

Researchers are also investigating whether garlic may prevent certain cancers since those who consume much garlic have reduced rates of the disease.

The National Library of Medicine in Bethesda, Maryland, contains about 125 scientific papers on garlic published since 1983. Studies reveal potent compounds that appear to retard heart disease, stroke, cancer, and a wide range of infections.

However, allicin is also the cause of the odour of the herb. Therefore, if there is no odour, there are no antibiotic properties. Three factors that cause heart disease, high blood cholesterol, high blood pressure, and platelet aggregation, are taken care of with the regular use of garlic in the diet.

Fresh cloves can be used at any time internally or externally to ward off any infection; used on any skin problems including warts and verrucas or to draw boils and corns; regular use prophylactically to ward off infections and improve the quality of the cardiovascular system; to rid the system of intestinal parasites.

Juice is made by crushing cloves and steeping in honey for several hours. Refrigerate and use throughout the day for coughs, colds, sore throats.

Oil can be made by crushing cloves and steeping in oil for one to two weeks. Refrigerate and use to massage into affected areas of arthritis, rheumatism, sprains, strains, and chest infections.

Maceration is done by steeping three or four cloves in water overnight and drinking the product the next day to rid the body of intestinal parasites.

Capsules contain garlic powder, but are considerably less potent (as much as 95% less) than fresh EXCEPT for Kyolic.

Pearl capsules are an alternative to the capsules and more “deoderized”, but also significantly less effective.

It is good for long term use to remedy cardiovascular problems, including lowering the risk of atherosclerosis, and thrombosis. It dilates peripheral blood vessels thereby improving blood flow.

It helps to regulate blood sugar.

Topically, it is used for skin infections and acne.

It helps to propogate friendly flora in the gut, while ridding the body of harmful microorganisms.

Because of its diaphoretic properties, it can treat fevers.

In traditional Mexican medicine, it is used for circulation, respiratory ailments, and digestive problems, and to expel intestinal parasites.

A clove of garlic crushed against the gum is a temporary remedy for a toothache.