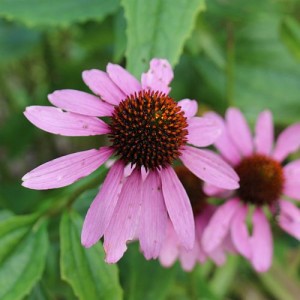 Native to the plains of North America, echinacea does not grow wild anywhere else in the world, but is widely cultivated, especially in Europe and the US. There are nine species of echinacea, four of which are used medicinally. However, E. purpurea has been studied the most and is the easiest to cultivate. The four species are E. angustifolia, E. pallida, E. purpurea, and the endangered E. tennensiensis.

Echinacea is a perennial, growing up to twenty inches in height, producing large, beautiful, daisylike purple flowers and leaves covered in coarse hair. The central “cone” of the flower is prominent and distinctive. It is found primarily in dry upland prairie regions, often in rocky areas of the Great Plains, east of the Rocky Mountains from Saskatchewan to Texas. There have been concerns over the years of overharvesting, leading many areas to declare the wild plant a protected species and forcing the development of cultivated areas for commercial purposes. It takes three to four years for the roots to reach harvestable size, although the flowerheads are harvested yearly.

The 18th century German botanist, Conrad Moench, named the genus Echinacea, which comes from the Greek echinos, meaning hedgehog, referring to the spiny, round seedhead which reminded him of a hedgehog or sea urchin. The species name, augustifolia, means “narrow-leaved”. In some older literature, the names of Rudbeckia and Brauneria were used for this genus instead of Echinacea.

Early settlers soon adopted the plant’s medicinal value from Native Americans as a remedy for colds and influenza, and took it to Europe in the 17th century.

Schar describes a typical scenario of herbs being introduced to the established medical society. A German country doctor discovered this remarkable American plant and its benefits and offered to show doctors its powers at a medical conference. He said that he would allow a snake to bite him and then cure that bite with nothing but echinacea. Nevertheless, the doctors ignored him. Dr. Meyer then presented this same offer to two other doctors named King and Lloyd, electics who belonged to a now-extinct branch of medicine. Uncharacteristically, these two doctors listened to the message and not the messenger and looked further into the herb’s power. Despite initial doubts, the herb was introduced into the 1887 Materia Medica.

American Eclectics, a group of doctors prominent from 1830 to 1930 who used botanicals in their practices, were a major force in bringing echinacea to the forefront of herbal medicine. They promoted it as a blood purifier for venereal disease, as well as an agent for treating migraines, rheumatism, tumors, malaria, and hemorrhoids. After their decline in the 1930s, the herb also fell into disfavour, but regained its stature when interest in herbal medicine revived in the 1970s and 1980s.

In a 1914 issue of Gleaner, Dr. J.S. Leachman reported that the cornflower root was used by early settlers in Oklahoma for their own sicknesses, as well as in their livestock. It is reported that if a cow or horse did not eat well, it soon began to thrive when Echinacea was added to its feed.

Once used by Native Americans, pioneers, and earlier generations of doctors, the herb fell out of favor after the advent of antibiotics in the 1930s, and only recently has been rediscovered — and exploited into hundreds of commercial preparations that claim to boost the immune system and ward off cold and flu symptoms. Within the last fifty years, it has achieved worldwide popularity as an antiviral, antifungal, and antibacterial. The first pharmaceutical company to research the plant was the Sandoz Company. Its findings were published in Germany in 1950. They found the root to possess milk antibiotic activity against Streptococcus and Staphylococcus aureus.

The native distribution of the plant does not extend into Mexico, indicating that its use there is as a result of trade between the tribes of the southern portion of the Prairie Bioregion and Mexico. Several tribes, including the Apache, Kickapoo, and Potawatomis, are known to have retreated into Mexico in the 19th century and may have taken the dried root with them. However, Mexicans often refer to a closely related species (Iostephane heterophylla) that they use which is found in Mexico.

Excavations of a Pawnee earthenlodge village called the “Hill” site, located near Guide Rock, Nebraska (occupied around 1800), uncovered roots identified as being from the purple coneflower. These were identified by the ethnobotanist Melvin Gilmore at the University of Michigan’s Ethnobotanical Laboratory in the early part of the 1900s. In 1917, he reported that the macerated root of the purple coneflower was used to treat snakebite, as well as other venomous bites, stings, and poisonings by all the Indians of the Upper Missouri region. He stated that these, and other, tribes used the purple coneflower “for more ailments than any other plant”.

Native Americans who used the herb to treat toothaches, sore throats, coughs, and infections. Their preferred method was to suck on the root. Researchers now feel that this is the best method as it activates the saliva and disease-fighting resources in the mouth, attacking anything that comes in. Most tribes used the plant to treat snakebites, fevers, and old, stubborn wounds, as well as on burns, swollen lymph nodes, and insect bites.

*The Blackfoot chewed the root to help alleviate toothache, while several tribes used the juice from the plant to treat burns, wounds, ulcers, and other skin conditions.

*The Sioux applied the freshly scraped root as a poultice against hydrophobia caused by the bites of rabid animals.

*The Cheyenne used it for sore mouths, the Choctaws for coughs, the Comanche for sore throats, the Crow for colds, and the Delaware for venereal diseases.

*The Dakotas used the freshly scraped root as a remedy for hydrophobia and snakebite and applied it to wounds that had putrefied.

*The Lakotas ate the root and green fruit when they were thirsty or perspiring and as a painkiller for toothache, tonsillitis, stomachache, and pain in the bowels. Echinacea is still widely harvested for a variety of medicinal uses by the Lakotas on the Rosebud Reservation in South Dakota.

*The Omahas recognized two kinds of echinacea: the male (nuga), or the larger and more masculine plant and the smaller, “female” (miga) herb. They used some parts of the plant for sore eyes. Their medicine men applied the macerated root as a local anesthetic so that they could remove pieces of meat from a boiling pot without flinching.

*Winnebago medicine men used it to make their mouths insensitive to heat so that they could put a live coal into their mouths to demonstrate their power. These feats helped create confidence in the ability of the medicine men to heal.

*The Kiowa have long used the plant in a cough medicine. They, and the Cheyenne, treated colds and sore throats by chewing a piece of the root and letting the saliva run down the throat. In the 1930s, they were still using the dried seed head as a comb and brush.

*The Cheyenne made a tea from the leaves and roots as a remedy for a sore mouth and gums. The same liquid was rubbed on a sore neck to relieve pain. Toothache caused by a large cavity was relieved by letting a tea from the plant come in contact with it. They also drank the tea as a remedy for rheumatism, arthritis, mumps and measles, and made a salve for external treatments of these ailments. When the roots were mixed with blazing star (Mentzelia laevicaulis) and boiled, the resulting tea was drunk for smallpox.

*Hidatsas warriors were known to chew small pieces of the root as a stimulant when travelling all night.

Scientifically, echinacea has been found to stimulate the production of leukocytes, the white blood cells that fight infection in the body. It also assists phagocytes in their job of engulfing toxins and preparing them for disposal. These immune fighters also remove damaged cells and any other irregularities in the blood.

It has a mild antibiotic effect, helping to protect cells from such invading pathogens as bacteria, viruses, and fungi. The plant both stimulates the properdin/complement system, which helps the body control and prevent infections, and increases production of alpha- and alpha-2 gamma globulins, which prevents viral and other infections.

Note: Each of the species has different medicinal properties; and some can be confused with, or adulterated by, Parthenium integrifoium, a non-therapeutic plant. This is more likely to result when manufacturers do not state the origin of their echinacea. E. angustifolia is considered to be the most potent by some practitioners.

It is mainly used mainly to treat impending infections of the common cold, coughs, bronchitis, fevers, urinary tract infections, inflammations of the mouth and pharynx, to boost immunity, and to treat wounds and burns.

It reduces the intensity and duration of cold and flu symptoms and helps the body fight recurrent infections, especially of the respiratory system, middle ear, urinary tract, and vaginal yeast infections. When taken at the first sign of colds or flu, echinacea may prevent the infection from taking hold or may shorten the duration of full-blown symptoms. Because echinacea’s effects are relatively short-lived, it is most effective if taken every two or three hours initially until symptoms are relieved, and then three times a day for a week to ensure complete recovery and optimal immune function. The overuse of this herb is regrettable because, when the immune system is continually artificially stimulated for too long, the unenhanced portion begins to deteriorate even further. Therefore, it should not be taken any longer than eight to ten days at a time. It is most effective if stopped for a week and then resumed. By taking ginseng for a year or so, the immune system will become stronger so that echinacea will have to be used only during an acute episode of illness rather than for a general feeling of tiredness.

Internally, it is also used for pain associated with headaches, stomach aches, measles, coughs, and gonnorrhea.

Externally, it is used as a treatment for poorly healing wounds and such inflammatory conditions as leg ulcers and abscesses. Echinacea speeds tissue repair and heals connective tissue. Torn ligaments also respond well to the plant and is often used in healing salves. In combination with St. John’s Wort in a salve, scarring from surgery and other wounds is markedly reduced.

Note: Coneflower, or Goldenglow (Rudbeckia laciniata) is not to be confused with the purple coneflower, also known as echinacea. Coneflower is a perennial herb that grows to about seven feet high with yellow flowers. The Chippewa used it in a tea as a soothing remedy for digestive upsets. When applied topically in a poultice, coneflower was effective in treating burns.