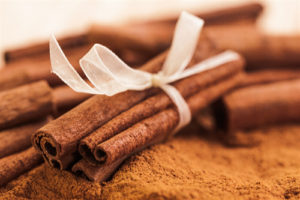 Native to Sri Lanka and India, cinnamon is now found growing in tropical forests worldwide to an altitude of 1,500 feet above sea level. It is extensively cultivated throughout the tropical regions, especially in the Philippines and West Indies, but mainly as a spice. The plant is a tropical evergreen tree that reaches about thirty feet in height. It has thick, smooth, pale bark and leathery, oval, green leaves with paler undersides and small white flowers. The bark, leaves, and the bluish, oval fruits are fragrant. Only the bark from wild trees is used medicinally as cultivated trees are less potent. After the bark is harvested, it is left twenty-four hours to ferment. The outer bark is then scraped away, leaving the inner bark for use. The inner bark is also distilled for its essential oil.

Cinnamon has a long history of medicinal use and is one of the world’s most important spices.

It is one of the oldest tonic plants in the world. The ancients Theophrastus, Herodotus, Galen, Dioscorides, Pliny, and Strebo all mention it.

Chinese use dates back at least 5,000 years. One Chinese ancient stated that if you took cinnamon with toads’ brains for seven years, you would be able to walk on water, look young forever, and never die. However, it is unlikely that many would want to after such a challenge!

It was first used medicinally in Egypt and India and in parts of Europe since about 500 BCE.

Traditionally, it was taken for colds, flu, and digestive problems and is still used in much the same way today.

The cinnamaldehyde has been shown by Japanese researchers to be a sedative and analgesic and thought also to reduce blood pressure and fevers.

One Japanese study showed that it may also help prevent ulcers. This is plausible since it is an antimicrobial and some ulcers are caused by bacteria.

Cinnamon oil has exhibited antifungal, antiviral, antibacterial, and larvicidal activities. Specifically, constituents in cinnamon are able to kill E. coli, Candida albicans, and Staphylococcus aureus. Staph infections usually cause lesions, pustules, and boils that can be terminal if spread to other organs.

Researchers at Kent State University, demonstrated that by adding one part cinnamon to 1000 parts apple cider, the combination killed more than 90% of the E. coli bacteria, a potentially deadly organism that is sometimes found in unpasteurized apple juice.

Eugenol, a chemical found in the oils of cloves, allspice, and cinnamon bark (but not cassia bark) has topical anesthetic properties, explaining its effectiveness as a painkiller for skin wounds.

Western herbalists generally use the bark of zeylanicum, while the Chinese prefer their own species, cassia.

Regardless of the variety, the bark, leaves, and roots produce essential oils that are used, not only to scent and flavour, but also for tonics, antiseptics, and remedies for flatulence, nausea, colds, and high blood pressure. It has traditionally been used to relieve upset stomachs and gas, diarrhea, as well as for stimulating the appetite and enhancing digestion.

Externally, it reduces the pain of minor cuts and abrasions.

In China, the bark (rou gui) and the twigs (gui zhi) are used for separate conditions. The bark is believed to be best for conditions involving the torso, while the twigs are for fingers and toes.

Cinnamon is often combined with ginger to stimulate circulation and the digestion.

The Chinese believe that cinnamon heats up a cold body, improves circulation, and generally causes the blood to rush, which in turn, will remove toxins faster.

In India, it is used to stimulate inadequate contractions during labor, and is also an effective pain reliever.

In both China and in India, the use of cinnamon is used to promote regular and easy menstrual cycles.

Cinnamon is often used as a flavoring in toothpaste, not only because of its refreshing taste, but also because of its antiseptic properties that help kill bacteria responsible for tooth decay and gum disease.

Cinnamon can also be beneficial to people with type-2 diabetes by reducing the amount of insulin necessary to metabolize glucose. Researchers found that one-eighth of a teaspoon of cinnamon can triple insulin efficiency.